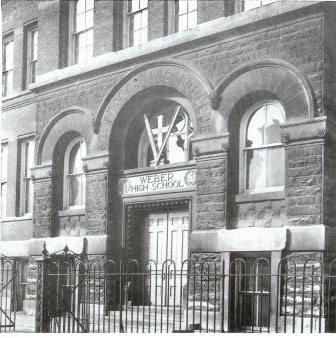 Weber High School was a Catholic boy’s high school originally located on the near northwest side of Chicago.  It began as St. Stanislaus College in 1890.  A boy’s high school was added in 1899, called St. Stanislaus High School.  It was renamed Weber High in 1930 after Archbishop Joseph Weber, CR, a member of the Congregation of the Resurrection.    The high school was affiliated with St. Stanislaus Kostka church in Chicago,  which was a predominantly Polish parish.  John Mallin decorated the chapel at the high school for Rev. Stanislaus Fiolek, C.R., who was pastor of St Stanislaus Kostka between 1948 and 1951.  In 1949, the high school moved to 5252 West Palmer due to the large number of students attending.   However, the school eventually closed in 1999 due to declining enrollment.  The original high school building no longer exists, but there is an active alumni association.  One of the alumni, Mr. Ed Dykla (class of 1951), remembers the chapel on the top floor, and stated, “It was a quaint beautiful chapel with beautiful décor.”