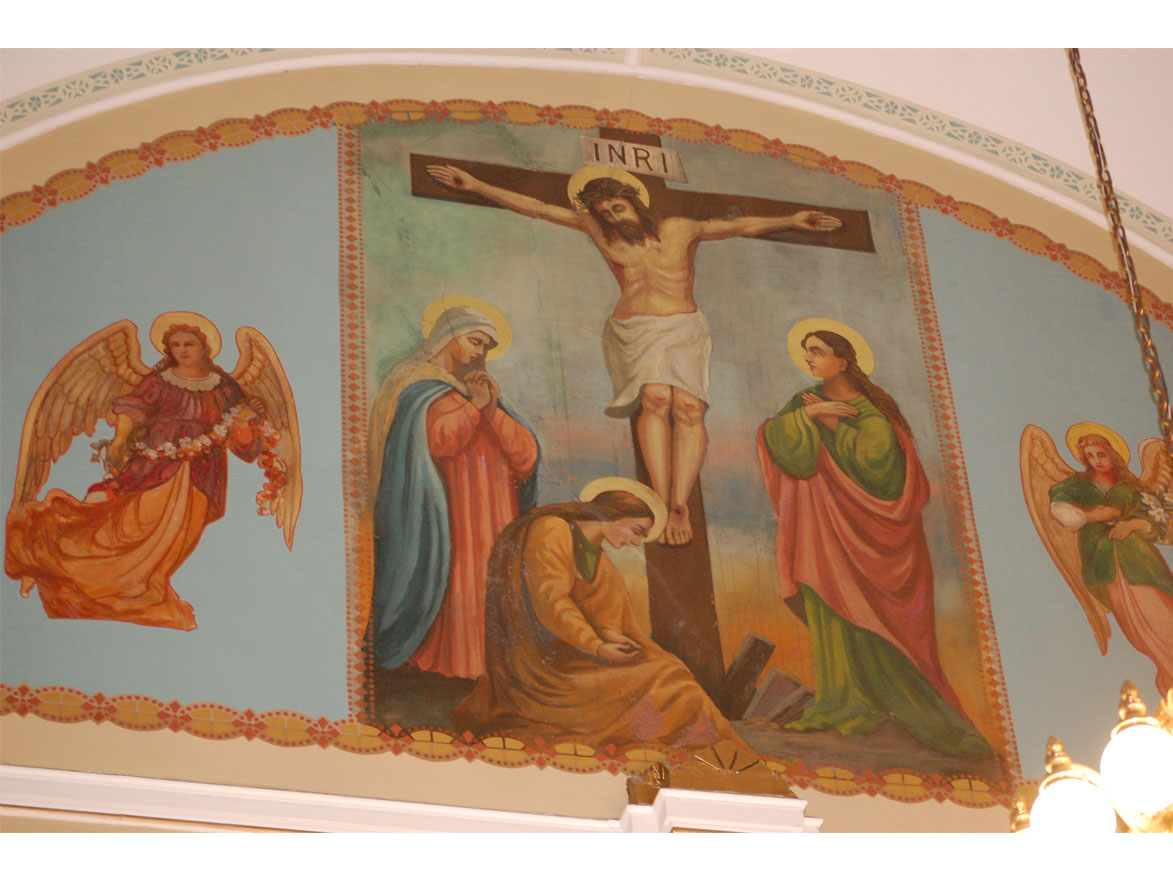 St. Procopius is located in Chicago’s Pilsen neighborhood, just southwest of downtown Chicago. The Parish was first organized in 1875 to serve a largely Czech community. The neighborhood derived its name from a Bohemian restaurant called “At the city of Plzen” a large city in Bohemia. Many of the Czech immigrants worked in the nearby McCormick reaper company (which later became International Harvester).

In 1883 a large Romanesque church was built to accommodate the growing parish. In 1884 a Benedictine community was established at St. Procopius with Fr. Nepomuk Jaeger, OSB as pastor. Fr. Cosmas Veselý, OSB, was named pastor in 1930. He undertook many improvements to the church in preparation for the 1935 Jubilee. In 1933, he hired Mallin to redecorate the church.

The 1933 specifications for decorating were quite specific, including the cleaning processes, as well as the types of paint and gold leaf to be used. These specifications included the stippling of the walls in three shades of color, and decorated with a border, with symbolized emblems of the Benedictine Order in the wall decorations. All of the columns were to be marbleized or done in inlaid ornament. The sanctuary ceiling walls were to be laid in with aluminum leaf, lacquered into an old Roman Gold effect, then decorated in a Romanesque brocade effect, highlighted and shaded by hand. Mallin states, “This kind of work will beautifully reflect and blend the colors of the windows, also give plenty of light in the sanctuary, which is required, if the decoration should be a success.”

The high and the side alters were to be washed and painted with a coat of flat white and enameled one coat of Vitralite enamel and highlighted with 23 carat XX Gold leaf. The main ceiling was to be decorated in ivory and genuine 23 carat XX Gold Leaf, and all the ribs were to be highlighted with a one inch 23 carat Ribbon Gold, and decorated with a three color border on each of the ribs. Each ceiling section was to be decorated with an ornamental rosetta in the center. The Pilaster Capital and Ornamental mouldings were to be shaded in colors, polychrome effect and highlighted with 23 carat XX gold leaf. The Stations of the Cross paintings already existing were to be cleaned with a special process and the frames refinished and redecorated to match the decorations. The mural oil paintings that were already present were to be cleaned and repainted. The bare spaces on each side of the present paintings were to be designed and decorated with one angel on each side, carrying different emblems, as per sketch. These angels can be seen in the photos of the high walls on the website, although they are holding flowers, not emblems. The total cost for all of the decorations was $5,366.
The church decorations have seen some modifications, primarily in the ceiling, arch and wall. The Rosettas on the ceiling centers that can be seen in the original black and white photo have been removed. The arch decorations and the symbols on the side walls below the mural paintings have also been painted over. The sanctuary decorations appear to be intact however.

During the 1960s, the Pilsen neighborhood had an influx of Mexican immigrants, and many of the Czechs had already moved out of the area. Spanish masses were added, as was a shrine to Our Lady of Guadalupe. In 1986, the Benedictines turned over the parish to the Chicago Archdiocese. In 1992, the Jesuits accepted the ministry of the church where they remain to this day.