In 1907, St Edmund’s church was the first Catholic parish established in the village of Oak Park, a town just west of the city of Chicago. Oak Park was predominantly Protestant at that time, and this community opposed the establishment of a Catholic church, believing among other things that “a horde of undesirables would rush in upon them with advent of the great Democratic church which draws no line between rich and poor…”1 The Rev John J. Code was first appointed by Archbishop James Quigley to organize the church.

The first mass in 1907 was said in a barn at the Scoville estate. With the help of a local banker, John Farson, funds were raised to build a church. In 1910 a new church designed by the architect Henry Schlacks was dedicated. The church was built in the English Gothic style of the 14th century using blue Bedford stone. Although most of the parishioners were Irish, Rev. Code chose an English saint for the parish, Edmund Rich of Abington, Archbishop of Canterbury.

As described in the web page of the St Edmund Preservation Society, the church was decorated in 1920 by the artist John F. Sturdy. The decorations were described in the 1920 parish bulletin.2 Describing the apse, “Amid a wealth of wheat and grape foliations clad in priestly garments…is the figure of Christ upon a miniature altar… On either side of him, surrounded by hovering and adoring angels are the kneeling figures.. of the Jewish high priest, censer in hand, and Melchisedech with bread and wine.”

Monsignor Code was still at St Edmund’s in 1943, celebrating his 50th anniversary as Pastor. It was in this year that he hired John Mallin to decorate the church. The 1943 decorations are described in detail in the Golden Jubilee book for Msgr. Code. Describing the sanctuary, “the decorations are in the Gothic style of ornament in which red, blue, and gold colors predominate. The cobalt blue and vermilion reds are made from expensive minerals are very durable, while the gold color is real beaten gold leaf over 23 carats fine.”

The St Edmunds Preservation Society website indicates that the same three apse figures from the 1920 decorations appear in the 1943 decorations, suggesting that “Mallin was probably instructed by Msgr. Code to keep and restore these figures in the apse.” These include the figure of Christ in the center, with Old Testament priest figures Aaron and Melchisidech King on either side. Also from this web page:

“To judge from the particular motifs of his floral and geometric stenciling, Mallin, like many other decorators and architects, may have owned a copy of the 1849 pattern book of A.W. Pugin, Floriated Ornament, now long out of print. Pugin’s immensely influential pattern book was based on his antiquarian research into medieval Gothic designs. His aesthetic premise that shapes found in nature (such as grape leaves) should be used, not naturalistically, but rather in two-dimensional, geometric patterns had a profound influence on the later Arts and Crafts movement and also on such Prairie School architects as George Maher and Frank Lloyd Wright. An example of John A. Mallin’s Puginesque work is the stylized grape-and-grape-leaf pattern he did on the ceiling of St. Thomas Aquinas Church on Washington Boulevard in Austin. Mallin’s color scheme at St. Edmund’s of cobalt blue, vermilion red, and gold described in the 1943 Jubilee book likewise shows the influence of Pugin who in his church of St. Giles at Cheadle in Staffordshire (1841-6) uses a similar color combination. In the Chicago area, Gothic Revival interior church décor was, as witnessed by Mallin’s work, still at its zenith in mid-twentieth century.”

A copy of the red blue and gold stencils used in the sanctuary in 1943 are shown in one of the photos on this web page, framed and currently hanging in the parish assistant’s office.

The 1943 decorations by Mallin are described in detail in the Golden Jubilee book.3 In the ceiling of the transept includes four large murals, “the Descent of the Holy Ghost upon the apostles, …the Ascension of Christ into Heaven,” the Assumption of the Blessed Virgin, and the Four Evangelists.” “Above the capitols in the transept where the ribs and arches meet are eight life size figures of angels. Four prophets are depicted on the north and south end of the transepts. In the nave ceiling are depictions of several ‘chief doctors of the church’, and on the ceiling of the sanctuary are portraits of ‘Peter, Prince of the Apostles, Paul, Apostle of the Gentiles, and Agnes and Aloysisus, patrons of youth of both sexes.”

In 1951, additional decorations were added by Mallin, which took approximately 6 months to complete. The Edmund Echoes Church Bulletin from 1951 states, “Walls and ceilings are covered with beaten pure gold leaf of 23 carats, in mosaic pattern adorned with delicate floral designs and symbols, furnishing a delightful background for more than two score oil paintings, illustrating teachings of the church from scenes in the life of its divine founder.4” Mr. Don Giannetti, the Parish Assistant at St Edmund, remembers the gold leaf being applied to the ceilings in 1951. He described the process whereby the ceiling was painted the same color as the grout, and then the stencils were glued to the ceiling. The gold leaf was applied over the stencils and any excess gold leaf flaked off and fell to the floor.

The 1951 bulletin describes in detail the paintings found in the vaulted ceiling, the transepts, the sanctuary ceilings, and the front vestibule. The cost of the decorations was $25,000, and parishioners were asked to help defray the costs by making votive offerings, with the suggested donations of $330 for large paintings and $100 for medallions, representing about half the cost of the paintings. Descriptions of the 19 large paintings and 12 medallions are found in the bulletin, as well as in a hand written document of Mallin, which describes the placement of each painting and medallion. The earlier decorations are also listed in this latter document, possibly as a reminder of the existing decorations. Or possibly this represents an earlier document in which the future decorations were planned for.

Some of the paintings were probably imported from Art Houses in Europe that Mallin contracted with, some were painted by Mallin himself. Of note, the Medallion of St John the Baptist on the ceiling has the face of Msgr. Code. Other churches Mallin did also included faces of the church priests painted on the head of figures in the artwork. Msgr. Code also had Mallin paint the face of St Theresa Little Flower with that of Sister Urban, who was a principal at St Edmund’s School at the time.

In the late 1990s some renovation and renovations were done to the church as described on the church website.5 Major changes in the decorations included painting over the gold stenciling on the sanctuary and church walls. One can still see the original stencils in a photo of the sanctuary at the St Edmund Preservation Society website.6 The other paintings and decorations are still intact.

Many thanks to Mr. Don Giannetti, the church parish assistant, who provided much of the background information on the church history and made it possible to photograph the church interiors. 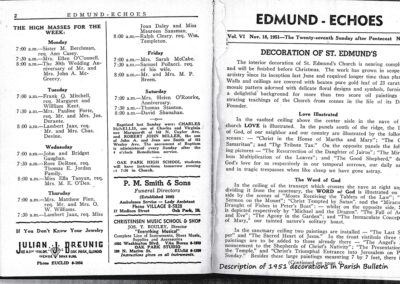